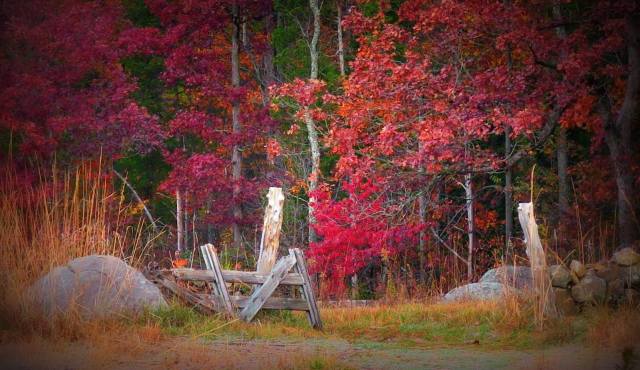 I have passed by this scene on top of Devil’s Den in Gettysburg, PA a 1,000 times. I have seen it in every weather element possible and I never fail to admire it. This scene, perhaps over 150 years ago, didn’t have the broken fence. But it had broken and bloodied bodies of Union and Confederate Soldiers here and all around. So much so, that the creek and marshes turned red.

So, what can be beautiful about the broken bodies of these soldiers? To me, it’s the strength of their love for their God and their families; as well as the fortitude of their courage. They were brave, resilient, had spirit, guts and strength of mind. They didn’t have our modern day conveinences. Some of them walked for days in the snow without shoes, no coats and many starved. I look around now and I see people who need “safe houses” because their candidate didn’t get elected. What about those who removed and still want to remove the remaining Confederate Battle Flags and monuments? They claim those objects of the Confederacy are racist and in their minds, it would stop all the evil this country has to offer. It is logic, I simply cannot fathom. But perhaps, it was nothing more than an excuse as obviously, the removal of those symbols did not stop more people from dying.  It just called to arms every ancestor of every Confederate Soldier and of the South, to rise up and take a stand. It separated the best of friends and caused division amongst those who honored the Confederacy and those who did not. So, in many ways, it started another war – a race war. Being called a “racist” because I voted for Donald Trump was a new thing for me. I love people. I do not care about the color. I care about the heart. All of our hearts beat the same color. Some hearts have grown cold and no longer feel what love is. They have allowed themselves to become bitter and evil to the point they feel justified in taking the life of innocent people. This is where the true blame should be; not in the flags, monuments or guns. Guns don’t kill people. They are simply the tool that causes death. People kill people. The gun by itself can do nothing on it’s own.

I never know how my blogs are going to turn out when I sit down to write them.  But this is on my heart. There is beauty in the broken. Those heroes who jumped in to save the dying, or drive them to the hospital or chased the gunman; the fire and police personnel who risked their lives and who do every day, there… is the beautiful.

This site uses Akismet to reduce spam. Learn how your comment data is processed.